FTA Europe is the umbrella organisation for flexographic printing associations in Europe.

FTA Europe was established in 2015 to represent and advance the common interests of the European flexographic (flexo) printing industry. The association provides a common platform for European flexo associations to exchange, collaborate and align.

The office of FTA Europe is in Brussels, shared with Intergraf, the European printing and graphics industry federation.

FTA Europe was founded as an ‘ASBL’ association according to Belgian Law and has its registered address in the offices of Intergraf, the European printing industry association, in Brussels.

The founding members are ATEF (Spain), ATF (France), ATIF (Italy), EFIA (United Kingdom) and EFTA Benelux. Membership is open to national flexo associations in Europe. As of 2019, we also have an affiliated membership offer for printing companies.

How was FTA Europe established?

A Flexographic Technical Association (FTA) has existed in the USA since 1958 with the aim of advancing the interests of the flexographic printing industry. In the 1970s and 1980s, a number of national flexo printing organisations were established across Europe, some of which were supported by the American parent organisation. The largest of which, the German DFTA, formed in 1979. Following larger countries in Europe in establishing flexo organisations, smaller and emerging European regions followed suit.

Despite the combined size of European flexo organisations being comparable to the membership base of FTA USA, the European flexo community is more fragmented due to language, national context, and business culture.

In 2014, however, a group of European national flexo organisations decided that the changing industry and environment in which flexo printers operate justified the creation of a common European platform. These changes include increasing regulation at EU level, the growth of the packaging and labels market, procurement opportunities, and the need to remain competitive. 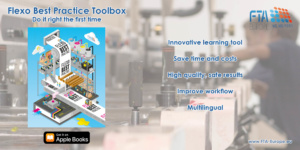